How does IntelliTect view success?

During a recent employee meeting, our CEO, Mark Michaelis explained how he sees success and that it isn’t some mythical destination. So often, great developers seem impossible to find and are referred to as unicorns because, even in fairytales, there are scarcely any of them. And while it’s important to strive for excellence, focusing on the unobtainable, isn’t ideal. Instead, why not bring your own unique and useful skills to a team that will appreciate your viewpoint, drive and determination to stand out in the world of software development?

Mark went on to talk about the ways specific IntelliTect team members excel at work and demonstrate excellence daily, and then he changed the PowerPoint slide behind him to reveal a rather large picture of a… Platypus? 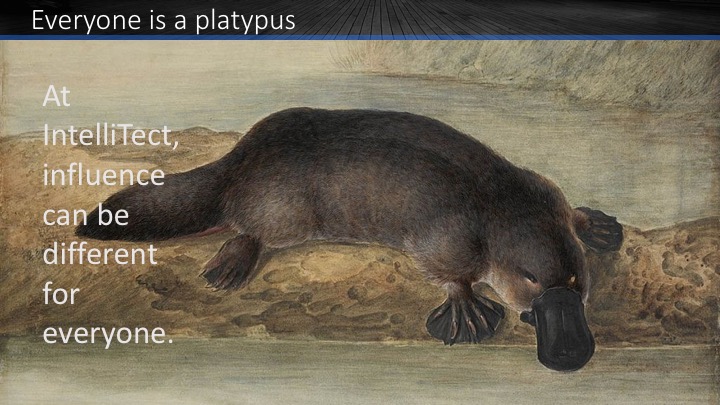 It took a moment as we all stared at the screen trying to understand how “Everyone is a Platypus” and whether or not that was a good thing. Until then, it seemed none of us (aside from Mark, perhaps) had ever really considered this semi-aquatic, poisonous, egg-laying mammal to be that remarkable of a character.

“My point was that y’all are too unique to just be unicorns,” Mark later commented on Yammer, our inter-office social media platform. “IntelliTect can accommodate each of your unique approaches to moving to the next level.”

The Path to the Platypus Awards

After that explanation, we couldn’t let go of the platypus idea. Sean Scura, SDET, posted one of our favorite descriptions of how we were all platypuses:

You enjoy your solitude and have never really fit into mainstream society. You are comfortable with this because you revel in your own uniqueness and strength of character. You lean toward a career where you spend a great deal of time alone – usually with some sort of sensitive electrical equipment (programmers and analysts). You work well on your own and are not afraid to use your imagination and logic to manifest what you desire in life. You are adept at examining your life experiences and know how to subtly share the lessons you glean from them, without preaching.

“I like this description of the platypus and I thought it rings true as to what Mark described us as individuals,” posted Sean. “I see it.”

He wasn’t the only one to see how important our uniqueness was. “Mark, I love that you view everyone at IntelliTect as individual (platypus or otherwise) with different strengths and talents that you want to see nurtured and expanded for the benefit of the person and the team as a whole,” posted Rachael Gartman, recruiter. “It’s encouraging to see people valued in that way.”

In the end, we decided that we’d rather be represented by the spirit-animal of the imaginative and logical platypus than live with the magical potential of the unicorn. We can be passionate about our work and strive for excellence without seeing it as a mythical or magical possibility.

Why not start now?

So, we embraced the concept and started the Platypus Awards to thank our team members for all their hard work making a unique difference every day. We added the slogan, “When you’re surrounded by unicorns, be a platypus,” as a daily reminder that excellence doesn’t have to be a mythical destination.

We bought a pet platypus (a cartoon version named Perry that also happens to be a secret agent). Perry lives on the recipient’s desk until he is passed on to the next Platypus of the Month during our mostly-monthly team meetings.

Our first Platypus of the Month was awarded in October 2018 to Software Engineer Yuriy Kravtsov. His impressive skills and persistence in posting his first blog for IntelliTect proved successful, and he’s decided to make it a series.

In December of 2018, Kevin Bost, senior software engineer, received Perry for his positive attitude while sick on one very long day. He worked at the IntelliTect office in the morning, taught his C# class at Eastern Washington University that afternoon and spoke at the Spokane .Net Users group in the evening. He may have lost his voice at the end of that long day, but he never lost his positivity.

Our January 2019 Platypus was Andrew Scott because of his proactive skills in managing some tricky customer relations when our CTO wasn’t able to be present. Andrew worked through some complicated issues, and the clients left satisfied with his solutions.

Along the way, Perry has been well cared for and has even started to receive some clothes. We’re excited to see where he ends up next because every time Perry finds a new desk to call home, we have the honor of shining some light on the character, creativity and hard work of another of our phenomenal team members.