Many .NET developers are familiar with ClickOnce, Microsoft’s simple deployment solution for quickly packaging and deploying software that is easy for end-users to install. However, these conveniences come with limitations.

Squirrel offers an alternative that provides similar end-user install experience and uses NuGet to package and deploy your application. It provides an elegant balance between developer control and automatic updating.

Integrating with your project

Next, we need to add in the code to check for updates.  Unlike ClickOnce, there is no magical bootstrapping of your application. You have to put in the code to do the update checks. Fortunately, the Squirrel library can do this with just a couple lines of code.

For this application, we will just do a single update check when the window loads.

In this example, I am using a local folder at the location for the updates. For most situations, this path will likely be a URL.

The handy UpdateApp method is doing quite a bit for us:

Now that the app is written we need to release it. Squirrel uses NuGet packages to deploy your application, so we need to bundle it as a NuGet package. For details on creating NuGet packages see this blog post. For this example, I have downloaded the latest (v4.1.0) NuGet CLI and placed it alongside my project file and am using the Package Manager Console to run commands.

Most of the values function exactly the same as a NuGet package, but there are a few things to note because this is being distributed with Squirrel:

To create the NuGet package, run:

This will generate a NuGet package “HelloWorld.1.0.0.nupkg” in our project directory.

Finally, we need to run the NuGet package through Squirrel to create a release.

Note: If this process fails, you may need to restart Visual Studio to get the Package Manager Console to reload the tools.

The Setup.exe contains a full copy of the NuGet package. So distributing this one file will be enough to install the application. The name of the file is not significant, and can be renamed to whatever you like.

The RELEASES file contains the list of releases that are available to be installed. This is just a simple text file that contains SHA1 hash, filename, and file size of all of the packages.

The HelloWorld.1.0.0.nupkg file will not actually get used for the initial install. However, it is needed for performing updates.

There is also a Setup.msi that gets created for doing machine wide installs. It can be ignored (or disabled) if this is not something you need to support.

Running the Setup.exe file allows the application to get installed and launched. 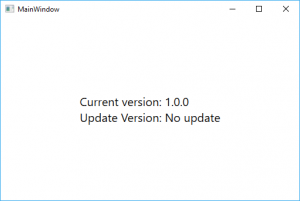 Now let’s simulate an update to see Squirrel at work 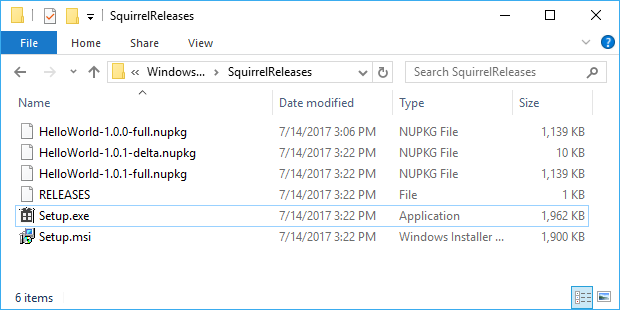 The Setup.exe is updated to contain the latest full NuGet package. Anyone who runs it will get the latest version (in this case 1.0.1) of the application. If you need to keep old Setup.exe files around to install older versions quickly, be sure to rename your existing Setup.exe file before running the Squirrel releasify command.

The RELEASES file has been updated to contain additional entries for the new packages.

You will notice that, in addition to the HelloWorld.1.0.1-full.nupkg, there is also a HelloWorld-1.0.1-delta.nupkg package created. Rather than containing the full application, it merely contains the delta between the binary files. These are typically much smaller and quicker to deploy. You can control if your application wants to use delta updates or only full updates (documentation) by using the UpdateManager .

The UpdateApp extension method that we used in this application always downloads the full update releases.

Re-running the application verifies that an update has been applied. 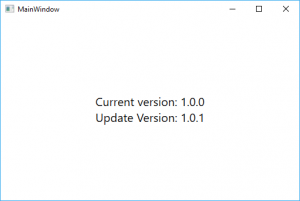 Re-launching the application one more time shows that we are now running the latest version. 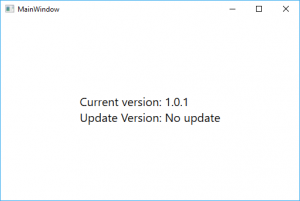 Squirrel also comes with lots of little features (many to alleviate some of the pain points on ClickOnce). You can read the complete documentation, but here are some of the highlights.

“Squirrel: It’s like ClickOnce but Works™” is a fitting slogan for this application. It only takes a short amount of time to integrate Squirrel into your Windows Desktop applications.