A Biker With an Affinity for Mentoring

"Thirty miles per hour – it turns out at that speed, you don’t hit pavement," Kevin said. "You get launched into the park." 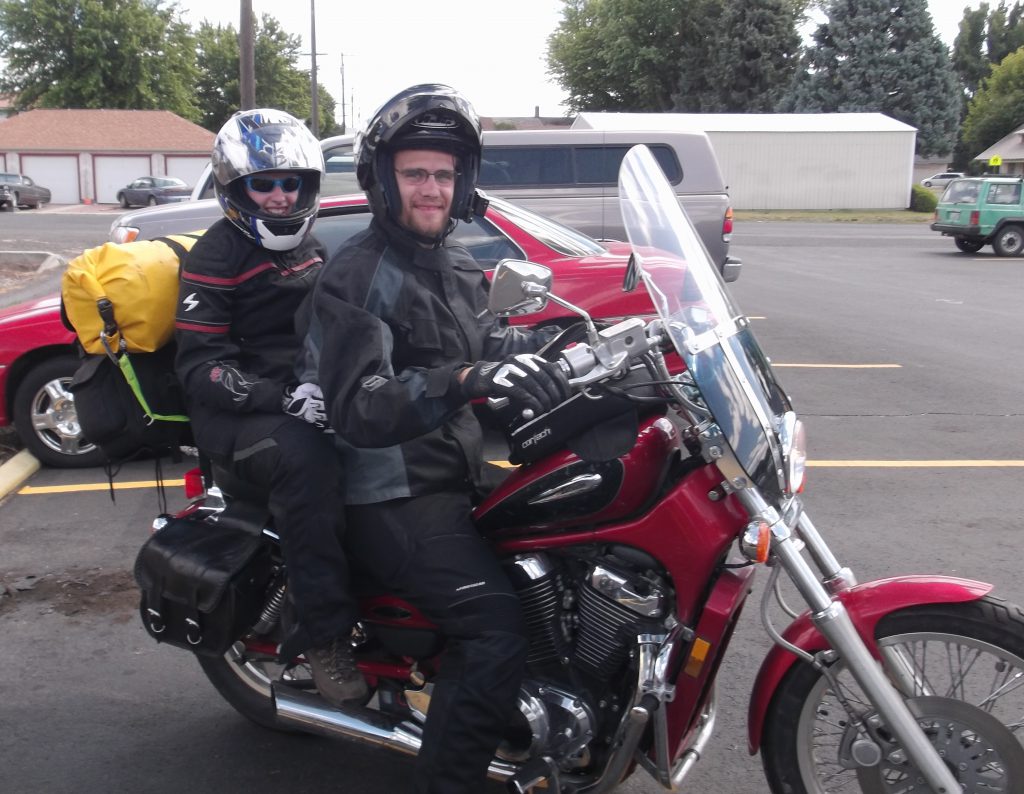 Kevin Bost hurtled through the air, a limp rag-doll in a helmet. Time slowed. He drew closer and closer to the prickly hickory bushes on the side of the road. As he flew past Spokane’s iconic red wagon, Kevin braced for the impending impact.

Wonder how Kevin Got Here?

I had the same question when Erin Wissing and I sat down to chat with Kevin Bost, one of IntelliTect’s senior software architects. What followed was an entertaining tale of his adventures, how he came to work at IntelliTect, and what led to him becoming a Microsoft MVP.

Kevin’s programming journey started back in high school. In his free time, he picked up the Java programming language, even going so far as to list it as a "foreign language" on his high school transcript, a requirement for graduation in Washington state. Coincidentally, it turns out "Javanese" is a language used by natives of Java’s island in Indonesia. 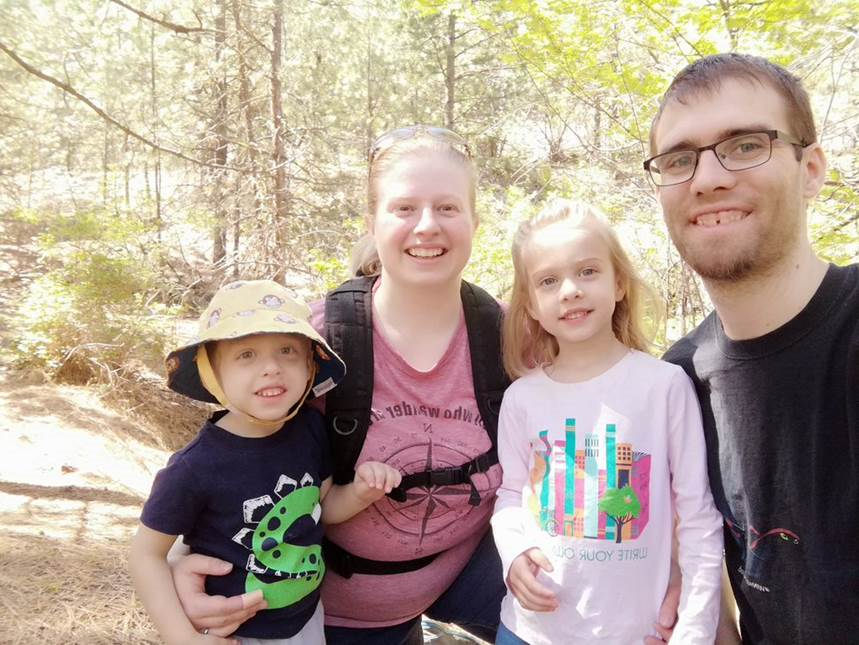 Kevin enjoys hiking with Heather and their wonderful children, Sophie and Josh.

After graduating high school, Kevin went to college to become a computer repair tech or network administrator. John Mill, one of his professors, recommended Kevin take a programming class. While skeptical at first and convinced he’d still pursue a career in I.T., Kevin wound up taking the course – and he was hooked!

Kevin said that the class was less about software and more about having fun building systems. He had an absolute blast and was excited for more, so he continued taking several programming classes, obtained an associate of specialized technology, and then went on to earn a baccalaureate in Computer Science from Eastern Washington University (EWU) – s’co Eags!

After graduating college, Kevin went to work for NextIT (now named Verint). He worked there for several years until layoffs forced him to look elsewhere. He found a job working on a ruby-on-rails project for a company that made physical therapy software, but quickly moved on (buy him a coffee, and he might tell you more) to a new company, Olive Tree Bible Software. While working at Olive Tree, a friend and IntelliTect employee, Tom Faust, reached out to see if he was looking for a new challenge. Kevin took Tom up on the offer and met with Mark Michaelis (IntelliTect CEO & Founder) and Phil Spokas (VP of Professional Services) for an interview.

Funnily enough, during the interview, Kevin realized that he had interviewed with IntelliTect a long time ago. Suffice to say, round two went well, and Kevin joined the team.

Years later, Kevin once again partnered with Olive Tree, but this time as an IntelliTect employee. The company was looking for a contract developer to quickly get a new project done and out the door. Already familiar with Olive Tree’s architecture and shared libraries, Kevin began working to create Olive Tree’s new mobile application.

Today, Kevin works on multiple projects, with his primary role being a mentor for several teams. One team member even referred to Kevin as the "grease in the cog of their team." He is also the architect on a forensic video project for Occam Solutions, whose software was recently featured on the Netflix series Exhibit A. 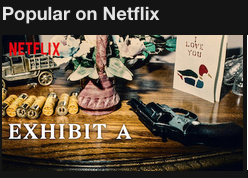 Kevin recently became a Microsoft MVP, primarily because of his growing mentorship capabilities. A consistent source of knowledge for clients and fellow IntelliTect engineers, Kevin has also become an adjunct professor at his alma mater, EWU. When the opportunity to teach a class at EWU through IntelliTect arose, Kevin jumped at the chance to spend more time mentoring. He loves to see the light bulb moment in his students’ eyes, whether they are his colleagues, clients, or students.

Kevin Bost’s understanding of C# and .NET is truly amazing. There are not many people outside of Microsoft that have his level of expertise. Remarkably, this isn’t what we appreciate most about Kevin, however. Rather, it’s Kevin’s ability to take his expertise and mentor others. As a result, Kevin is creating a legacy, a sphere of influence that will likely persist in the hearts and minds of his peers for the rest of their lives. We are truly grateful to have Kevin on our team.

When not spending his time being paid to code, Kevin "loves coding." He often spends his free time in front of a computer screen. As an avid open-source contributor, he’s usually working on projects such as Material Design In XAML, Moq AutoMocker, and Microsoft’s System.CommandLine. When pressed for an answer other than coding, Kevin shared his passions of playing ultimate frisbee with his friends, motorcycle riding, and streaming his coding.

As a participant in several open-source projects, Kevin found he continually answered many of the same questions in various repositories and chat rooms. Kevin’s streaming spawned when he asked himself the question, "What if I just turn my camera on and stream me doing the work I’m already doing?" He has been streaming regularly for over a year now and enjoys having fellow peers and friends join him on his stream whenever possible.

When asked if there was anyone at IntelliTect that Kevin would enjoy trading places with, Kevin was quick to point out who he would not trade places with. He loves the freedom to create and wants to avoid a life of endless meetings. After working his way through all his teammates, Kevin arrived on our creative intern, Austen "The MacGyver of Everything" Frostad. Kevin really loves writing code and is somewhat envious of the fun projects Austen gets to tackle as an intern.

Where the Rubber Meets the Code

Let’s return to Kevin flying through the air. Kevin landed in some hickory bushes after being struck by a truck while riding his 2000 SV 650 motorcycle. It turns out, the bushes were the only painful landing location within his flight path. Thankfully, he fully recovered from his injuries.

Comparing his accident to his coding experience, Kevin couldn’t help but bring up the "Truck Factor." Kevin’s former EWU professor, Tom Capaul, had taught about the "Truck Factor," where he asked students, "How many people on your team need to be hit by a truck before your project completely tanks?"

Always one to create unseen connections, it seems fitting to end with Kevin’s take on how riding a motorcycle crosses paths with software development. Take it away, Kevin:

For steering of a street bike, you counter-steer. To make a right-hand turn, rather than pulling the handlebar on the right-hand side toward you, you actually push down and away. That causes the bike to lean to the right and turn. It feels counter-intuitive. When you do it, it ends up making the corner a lot easier. The bike does the work for you.

In software development, people want to force software into doing what they want. I need something that does X. And rather than looking for something built into the framework or spending a little time researching “How do I get that problem solved?”, even if it is a little counter-intuitive, people often times rewrite stuff that has existed or been done many times over. Stop writing that – use the built-in stuff. You do want to build on the work of other giants.

Don’t be afraid to counter-steer in software.