In my last two articles, Logging with .NET Core (bit.ly/1Vv3Q39) and Configuration with .NET Core (bit.ly/1OoqmkJ), I demonstrated how .NET Core functionality can be leveraged from both an ASP.NET Core project (project.json) as well as the more common .NET 4.6 C# project (*.csproj).  In other words, taking advantage of the new framework is not limited to those who are writing ASP.NET Core projects.  In this column I’m going to continue to delve into .NET Core, this time with a focus on .NET Core dependency injection capabilities and how they enable an inversion of control (IoC) pattern.  As before, leveraging .NET Core functionality is possible from both “traditional” CSPROJ files and the emerging project.json type projects.  For the sample code, this time I’ll be using XUnit from a project.json project.

With .NET, instantiating an object is trivial with a call to the constructor via the new operator (that is, new MyService or whatever the object type is you wish to instantiate).  Unfortunately, an invocation like this forces a tightly coupled connection (a hard-coded reference) of the client (or application) code to the object instantiated, along with a reference to its assembly/NuGet package.  For common .NET types this isn’t a problem.  However, for types offering a “service,” such as logging, configuration, payment, notification, or even dependency injection, the dependency may be unwanted if you want to switch the implementation of the service you use.  For example, in one scenario a client might use NLog for logging, while in another they might choose Log4Net or Serilog.  And, the client using NLog might prefer not to dirty up their project with Serilog, so a reference to both logging services would be undesirable (see Figure 1).

Figure 1. Strongly Coupling the Client to the Logging Service Implementation

To solve the problem of hard- coding a reference to the service implementation, dependency injection provides a level of indirection such that rather than instantiating the service directly with the new operator, the client (or application) will instead ask a service collection or “factory” for the instance, as shown in Figure 2. Furthermore, rather than asking the service collection for a specific type (thus creating a tightly coupled reference), you ask for an interface (such as ILoggerFactory) with the expectation that the service provider (in this case, NLog, Log4Net, or Serilog) will implement the interface. 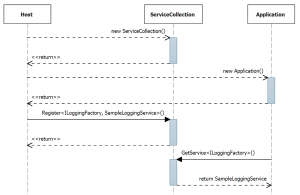 The result is that while the client will directly reference the abstract assembly (Logging.Abstractions), defining the service interface, no references to the direct implementation will be needed, as shown in Figure 3.

Figure 3. Decoupling the Client/Library from the Specific Logging Implementation via Dependency Injection

We call the pattern of decoupling the actual instance returned to the client inversion of control.  This is because rather than the client determining what is instantiated, as it does when explicitly invoking the constructor with the new operator, dependency injection determines what will be returned.  Dependency injection registers an association between the type requested by the client (generally an interface) and the type that will be returned.  Furthermore, dependency injection generally determines the lifetime of the type returned, specifically, whether there will be a single instance shared between all requests for the type, a new instance for every request, or something in between. 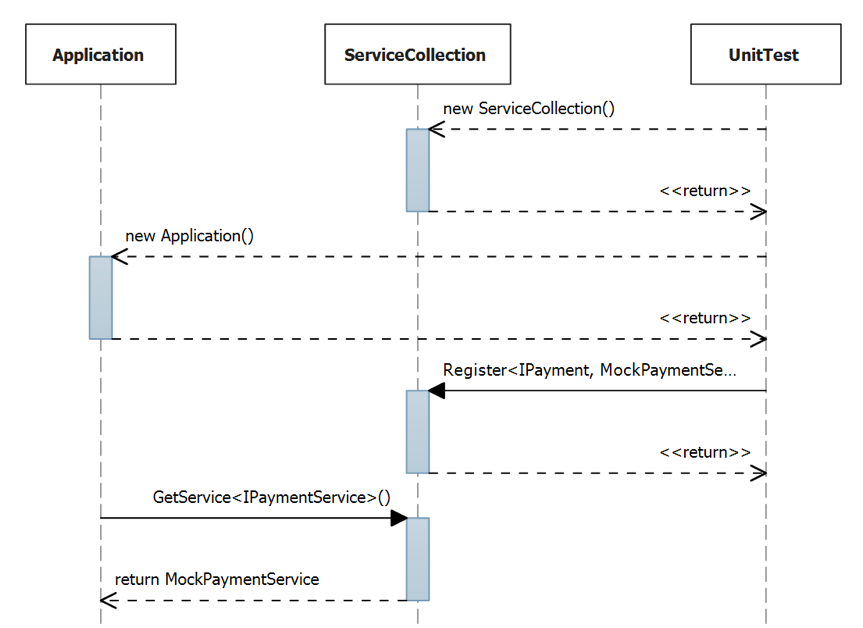 In contrast, the production host could configure the shopping cart to use one of the (possibly many) payment service options. And, perhaps most importantly, the references would be only to the payment abstraction, rather than to each specific implementation (see Figure 5).

Figure 5. Unit Testing with Dependency Injection so a Mock Type Instance Can Be Used

Providing an instance of the “service” rather than the client directly instantiating it is the fundamental principle of dependency injection. And, in fact, some dependency injection frameworks allow a decoupling of the host from referencing the implementation by supporting a binding mechanism that’s based on configuration and reflection, rather than a compile-time binding. This decoupling of is known as the service locator pattern.

To leverage the .NET Core framework, all you need is a reference to the Microsoft.Extensions.DependencyInjection.Abstractions NuGet package. This provides access to the IServiceCollection interface, which exposes a System.IServiceProvider from which you can call GetService

There are equivalent non-generic GetService methods that have Type as a parameter (rather than a generic parameter).  The generic methods allow for assignment directly to a variable of a particular type, whereas the non-generic versions require an explicit cast because the return type is Object.  Furthermore, there are generic constraints when adding the service type so that a cast can be avoided entirely when using the type parameter.

If no type is registered with the collection service when calling GetService, it will return null.  This is useful when coupled with the null propagation operator to add optional behaviors to the app.  The similar GetRequiredService method throws an exception when the service type is not registered.

As you can see, the code is trivially simple.  However, what’s missing is how to obtain an instance of the service provider on which to invoke GetService.  The solution is simply to first instantiate ServiceCollection’s default constructor, then register the type you want the service to provide.  An example is shown in Figure 6, in which you can assume each class (Host, Application, and PaymentService) are implemented in separate assemblies.  Furthermore, while the Host assembly knows which loggers to use, there is no reference to loggers in Application or PaymentService.  Similarly, the Host assembly has no reference to the PaymentServices assembly.  Interfaces are also implemented in separate “abstraction” assemblies.  For example, the ILogger interface is defined in Microsoft.Extensions.Logging.Abstractions assembly.

Figure 6. Registering and Requesting an Object from Dependency Injection

You can think of the ServiceCollection type conceptually as a name-value pair, where the name is the type of an object (generally an interface) you’ll later want to retrieve and the value is either the type that implements the interface or the algorithm (delegate) for retrieving that type.  The call to AddInstance, in the Host.ConfigureServices method in Figure 6, therefore, registers that any request for the ILoggerFactory type return the same LoggerFactory instance created in the ConfigureServices method.  As a result, both Application and PaymentService are able to retrieve the ILoggerFactory without any knowledge (or even an assembly/Nuget reference) to what loggers are implemented and configured.  Similarly, the application provides a MakePayment method without any knowledge as to which payment service is being used.

In Figure 6 I invoke the IServiceCollection AddInstance

In contrast, the IServiceCollection AddSingleton

and DI will take care of retrieving the ILoggingFactory concrete instance and leveraging it when instantiating the PaymentService class that requires an ILoggingFactory in its constructor.

If there’s no such means available in the TService type, you can instead leverage the overload of the AddSingleton extension method, which takes a delegate of type Func<iserviceprovider, tservice=""> implementationFactory—a factory method for instantiating TService.   Whether you provide the factory method or not, the service collection implementation ensures that it will only ever create one instance of the TService type, thus ensuring that there’s a singleton instance.  Following the first call to GetService that triggers the TService instantiation, the same instance will always be returned for the lifetime of the service collection.

IServiceCollection also includes the AddTransient(Type serviceType, Type implementationType) and AddTransient(Type serviceType, Func<iserviceprovider, tservice=""> implementationFactory) extension methods.  These are similar to AddSingleton except they return a new instance every time they’re invoked, ensuring you always have a new instance of the TService type.

Lastly, there are several AddScoped type extension methods.  These methods are designed to return the same instance within a given context and to create a new instance whenever the context—known as the scope—changes.  The behavior of ASP.NET Core conceptually maps to the scoped lifetime.  Essentially, a new instance is created for each HttpContext instance, and whenever GetService is called within the same HttpContext, the identical TService instance is returned.

In summary, there are four lifetime options for the objects returned from the service collection implementation: Instance, Singleton, Transient, and Scoped. The last three are defined in the ServiceLifetime enum (bit.ly/1SFtcaG).  Instance, however, is missing, since it’s a special case of Scoped in which the context doesn’t change.

Regardless of which lifetime you register your TService with, the TService itself must be a reference type, not a value type.  Whenever you use a type parameter for TService (rather than passing Type as a parameter) the compiler will verify this with a generic class constraint.  One thing, however, that’s not verified is using a TService of type object.  You’ll want to be sure to avoid this, along with any other non-unique interfaces (such as IComparable perhaps).  The reason is that if you register something of type object, no matter what TService you specify in the GetService invocation, the object registered as a TService type will always be returned.

Microsoft.Framework.DependencyInjection.Abstractions also includes a static helper class that provides a few useful methods in dealing with constructor parameters that aren’t registered with the IServiceProvider, a custom ObjectFactory delegate, or situations where you want to create a default instance in the event that a call to GetService returns null.  You can find examples where this utility class is used in both the MVC framework and the SignalR library.  In the first case, a method with a signature of CreateInstance

One thing to note about ASP.NET Core is that it leverages dependency injection throughout.  This is undoubtedly a great practice if you need it and it’s especially important when trying to substitute mock implementations of a library in your unit tests.  The drawback is that rather than a simple call to a constructor with the new operator, the complexity of dependency injection registration and GetService calls is needed.  I can’t help but wonder if perhaps the C# language could simplify this but, based on the current C# 7.0 design, that isn’t happening any time soon.

Thanks to the following IntelliTect technical experts for reviewing this article: Kelly Adams, Kevin Bost, Ian Davis and Phil Spokas.