As a result, Find-Module works without issue. However, Install-Module will prompt you with an untrusted repository warning. To avoid this, assuming you do indeed trust the repository, you can set it to trusted with the command:

Apt-Get for Windows with PowerShell Package Management Those of you who have spent any time as an IT professional in the Linux world have no doubt taken apt-get for granted—likely with install scripts that bootstrap their environment the moment they start up a new Linux instance. For those of you who haven’t, apt-get is a command-line way to download and install programs/packages and any dependencies quickly and easily from the Internet right from the command line. Figure 1 shows a trivial example of such an installation when it leverages apt-get to install libunwind8 libicu52, on which PowerShell (on Ubuntu 14.04) depends. With PowerShell 5.0, the same functionality comes to Windows (I’m not sure whether to shout, “Yahoo!” or exasperatedly sigh, “Finally!”—perhaps both).

Just as there are repositories, like PowerShell Gallery, for PowerShell modules, PowerShell 5.0 also includes support for managing programs—called packages—in Windows. One such package manager is Chocolatey (chocolatey.org) and you can add it as a package repository using the following command:

This allows you to use PowerShell to find packages that have been deployed into Chocolatey. For example, if you want to install Visual Studio Code all you have to do is enter the commands:

As shown, wild cards are supported. Other Package commands to be familiar with are available using the following command, with the results shown in Figure 3:

As you can see, you can both get and uninstall a package. Get-Package lists all the programs (and more) available from the Control Panel Programs and Features. Therefore, if you wanted to uninstall Notepad2, for example, you could use the command:

The ease this brings to auto­mating Windows computer setup is tremendous. I’ve been a Chocolatey fan for a number of years now and this integrates Chocolatey support directly into Windows. It ultimately brings package management to Windows in much the same way that Apt-Get does on Linux.

One thing to consider is that not only can the Chocolatey repos­itory be accessed via the -package PowerShell commands, but Chocolatey can also be installed directly. While not required, installing Chocolatey directly will occasionally provide a more robust feature set of package management functionality. Fortunately (and perhaps ironically), installing Chocolatey is simply a matter of invoking Install-Package Chocolatey, but (and this is an example of the discrepancies between Chocolatey and *-Package behavior) the default install location will depend on which installation engine is used. Check out chocolatey.org/install for more information on the Chocolatey toolset, including installation instructions for your environment.

Another PowerShell 5.0 feature that’s worth mentioning is the ability to generate a set of methods that access an OData data source such as Visual Studio Team Services (VSTS). Figure 4 demonstrates running the Export-ODataEndpointProxy on an OData service, a public sample Northwind OData service in this case. 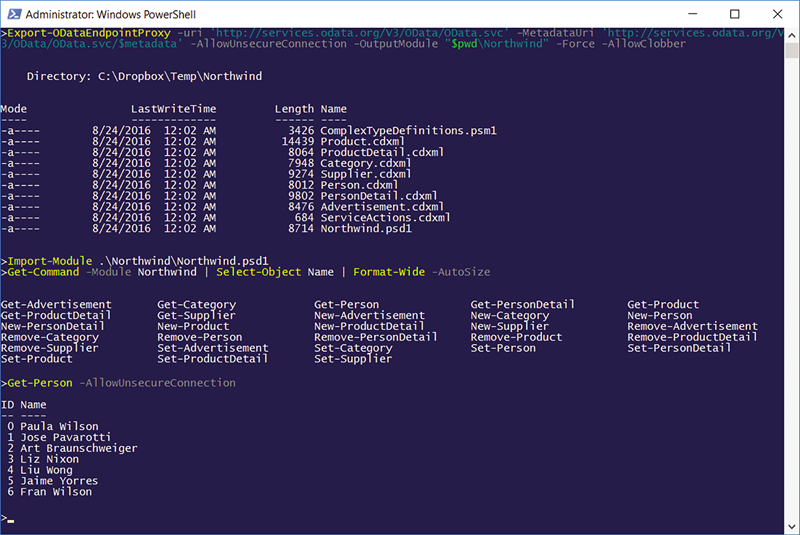 If you browse the generated module commands, you’ll notice that separate commands are generated for each entity (Advertisement, Category, Person and so forth), along with corresponding actions for each (Get, New, Remove, Set). One thing to note on the command line in Figure 4 is the use of the -AllowUnsecureConnection parameter. This is necessary because the OData service used in this example doesn’t require authen­tication or encryption.

Converting from Text to Objects with ConvertFrom-String

Another new command to appear in PowerShell 5.0 is ConvertFrom-String. It’s designed to take structured text as input and interpolate the structure so as to output an object based on the parsed text. You could use this, for example, to parse a flat file or (and this is where I find it extremely useful) to convert the text output from an executable into an object.

Consider, for example, SysInternal’s handle.exe program, (which you can install using the Install-Package Handle command—­leveraging package management as discussed in the previous section). As you’d expect from a command-line utility, it writes out text to stdout—in this case a list of open handles associated with a name. In PowerShell, however, you’ve grown accustomed to working with objects. And, to convert the text output into an object, you use the ConvertFrom-String function, as shown in Figure 5.

Figure 5. Utilizing ConvertFrom-String to Parse stdout into an Object 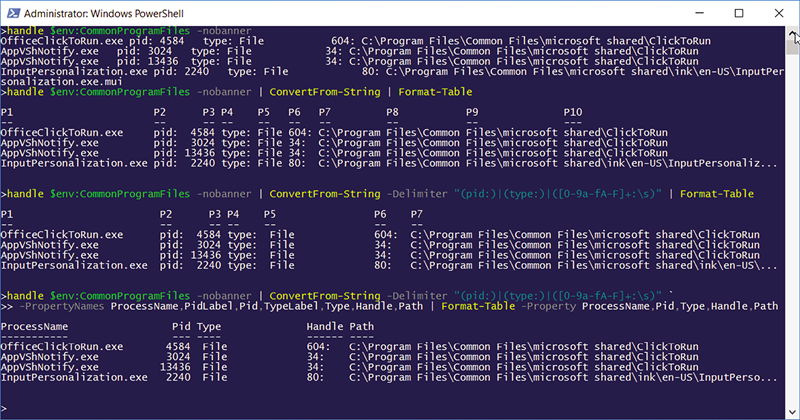 Figure 5 starts by showing the raw output of the handle.exe utility. Next, it demonstrates ConvertFrom-String without any parameters. As a result, the ConvertFrom-String utility simply splits the text on each line based on white space.

In the third example, I demonstrate the option of specifying a regular expression split pattern in order to fine-tune the parsing. However, note that familiarity with regular expressions isn’t required. You can instead specify a template—perhaps more accurately a sample—of either a file or a string, in which you parse the first few items manually. ConvertFrom-String then leverages the sample-parsed content and interprets how to parse the remainder of the input.

In the final example, I added the -PropertyNames parameter so as to assign meaningful names to the output.

In the end, ConvertFrom-String bridges the impedance mismatch of the text-based world of the traditional process stdout with a Power­Shell world built on objects. In this case, I can pipe the output into Stop-Process -Id mapping the pid value into the -Id parameter value.

Finally, here’s a rundown on the new class and enumeration support. In PowerShell 5.0, two new keywords were added corresponding to the two structures so that you can now declare a class or an enumeration directly in PowerShell (rather than using Add-Type and passing C# code or perhaps instantiating a PSCustom­Object). The syntax is what you’d expect—see Figure 6.

Notice in particular, that both properties and methods are supported. Furthermore, there are declaration modifiers like static and hidden, which designate the associated construct accordingly. Furthermore, inheritance is supported with a syntax very similar to C#:

Last, and also demonstrated in Figure 6, constructors can be declared. In this example, I declare a default constructor (with no parameters) and a second constructor that takes all the parameters. The constructors are invoked via the New-Object command by specifying either the -ArgumentList parameter (where an array of constructor arguments is listed) or else a HashTable argument is passed via the -Property parameter.

By no means is this a complete list of new features in PowerShell 5.0. Other notable items include:

Furthermore, while not supported immediately in the open source release of PowerShell, Microsoft fully intends to support Open SSH such that it will be a reemitting transport option in PowerShell, as well as in Windows Remote Management, not long after this article is published.

All this to say, PowerShell just keeps getting better and better. If you haven’t learned it yet, get going.

Thanks to the following IntelliTect technical experts for reviewing this article: Kevin Bost.

This article was originally posted here in the October 2016 issue of MSDN Magazine.