Whether you’ve worked with them for years or have never met our featured employee, this column will continue to introduce you to the many faces of IntelliTect. For this issue, we featured a bright innovator who caught the coding bug as a sophomore in high school: Andrew Scott. 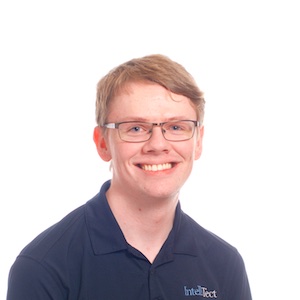 “Maybe the solution is infeasible, but we won’t know until we really dig deep into the problem space,” Andrew said when explaining his views on innovation.

He discovered the value of trial and error in high school when he fixed a broken AddOn to World of Warcraft (WoW) with minimal coding skills. Looking back, he can laugh at how amateur his skills were, but he enjoyed the process.

When a new WoW expansion was released, another favorite add-on, TellMeWhen, stopped working and Andrew fixed it. He shared the fixes with other users and eventually started adding new features as well. Eventually, he reached out to the admins of the site where the abandoned add-on was hosted and received ownership of the project.

Over the past eight years, there have been over 13 million downloads of Andrew’s TellMeWhen add-on!

Andrew admits that he just happened upon programming by coincidence through playing WoW; before that, he thought about becoming a pharmacist or an IT support technician, but after he got the itch for programming through his work on WoW add-ons, his career path shifted.

“Andrew has the unique ability to not only learn new concepts rapidly but also to identify the best architecture to solve a challenge. He continues to surprise me with his keen observations and unique solutions to difficult problems. If skill and speed are a necessity for your project, you definitely want Andrew.”

Andrew likes what he likes, owns more cat t-shirts than the entire IntelliTect team combined, and enjoys spending time with his beloved cat.

Andrew keeps life simple and spends much of his downtime at home with family. When on his computer, Factorio is his current game of choice. In this game, players start on an alien planet with only a pickaxe and the objective to build a massive factory to eventually build and launch a rocket. In order to be successful at the game, players must design efficient and well-organized assembly lines for their factory. In short, Andrew is constantly innovating, even in his free time.

“Shut me in a room for five weeks, and I’ll see what I can build.” Andrew thrives when he is totally free in his own space to innovate and build. Recently, IntelliTect’s CTO, Grant Erickson, proposed that the team try to solve a long-standing, far-reaching problem that a client site had been dealing with. After much investigation, Andrew and Grant eventually found one analyst at the client company who thought it might be able to be done, but not without great difficulty. That’s all the assurance they needed, and they were given the green light to attempt to solve this open-ended problem. In the end, Andrew architected Carbon, a tool for replicating customer account data in Oracle’s CCB and MDM for testing and training.

"While Andrew has numerous wonderful qualities, there is one in particular that stands out: executing excellence. Andrew gets stuff done. There are members of the IntelliTect team that I affectionately refer to as Tasmanian devils because of the rapidity at which they consume whatever work you put in front of them. Andrew is undoubtedly a Tasmanian devil; he executes each task with excellence. His comprehension of programming, frameworks, architecture and technology is extremely deep, and he leverages that to ensure that what he is creating is exceptional."

An extremely analytical engineer, Andrew loves unraveling tricky problems but knows that some projects just need hands on a keyboard, and that’s fine. He maintains his belief that, “if the IntelliTect team picks up a project where there is a lot of chance to innovate, then we’re certainly able to execute. I stay here because I like what I do. I don’t know if I would want to be anywhere else.”

Want to check out Andrew’s TellMeWhen add-on? Check it out on CurseForge!